Ben Stiller, who directed himself in the hit comedies Zoolander and Tropic Thunder, helms and stars in the fantasy The Secret Life of Walter Mitty, based on a James Thurber short story that inspired the 1947 Danny Kaye film of the same name. Stiller, the son of actor-comedians Jerry Stiller (who is of Polish-Jewish heritage) and Anne Meara (Irish-Catholic by birth, she converted when she married Stiller), plays a shy, sheltered photo editor who emerges from his shell as his wild flights of fancy become real.

“There’s something about this journey that he goes on that I connect with personally and I hope that the audience feels that too,” says Stiller, who spent the last three years making the movie, which opens December 25. He admits that acting and directing simultaneously is no easy feat. “You want to be in two places at once and it can be frustrating. I can see myself just directing as the roles dry up.” That isn’t likely to happen soon, though. The third installment of the Night at the Museum franchise is due next Christmas, and a possible sequel to Zoolander is on tap for 2015. 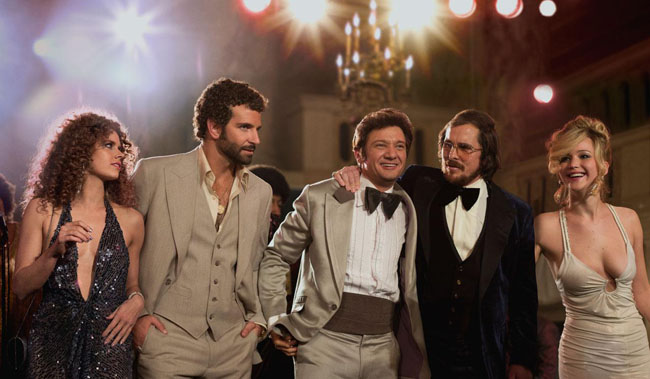 The well-deserved accolades keep coming for American Hustle, David O. Russell’s comic con game flick loosely based on the real-life Abscam FBI sting of the late ’70s. Nominated so far for a SAG award for its all-star cast, it collected seven Golden Globe nominations for Best Picture, Best Actor Christian Bale, Jennifer Lawrence, Amy Adams and Bradley Cooper and Best Director and Best Screenplay nods for Russell, who is Jewish on his father’s side. There’s an interfaith connection in the movie too: Christian Bale plays a Jewish scam artist named Irving Rosenfeld, and while it’s not overtly stated, the two women in his life (brilliantly played by Adams and Lawrence) presumably are not.

The Music of Mary Poppins

Opening in wide release on December 25, Saving Mr. Banks stars Emma Thompson as the wonderfully cranky, prickly author P.L Travers and Tom Hanks as Walt Disney, perpetually trying to convince her to let him make a movie of her precious Mary Poppins. Jewish songwriters Richard and Robert Sherman were the duo who penned “Supercalifragilisticexpialidocious” and the rest of the musical’s score. Playing the tunesmith brothers are Jewish actor B.J. Novak and Jason Schwartzman. Schwartzman is the son of Italian-Catholic actress Talia Shire and Jewish producer Jack Schwartzman, though he wasn’t raised with either religion. Harvard grad Novak, whose parents once ran a Jewish matchmaking service, dated actress Mindy Kaling, who is not Jewish. He’ll next be seen in The Amazing Spider-Man 2, due out in May.

The Wolf and Her

For two people who are never seen on screen together, the stars of Her have terrific chemistry and something else in common: Both Joaquin Phoenix and Scarlett Johansson have mothers who were Jewish and fathers who were not. The unconventional future-set romantic comedy starring Phoenix as a lovelorn letter writer and Johansson as the computer operating system he falls in love with, is the brainchild of director-writer Spike Jonze, né Adam Spiegel. He is also the product of an interfaith marriage, with a Jewish father and Scottish-German mother. Nominated for Best Picture, Best Actor and Best Screenplay Golden Globes, Her will expand its release on January 10.

Meanwhile, Jonze has a small role in the Christmas Day release The Wolf of Wall Street, Martin Scorsese’s manically funny ode to excess and overindulgence in greed, drugs, sex and illegal activity. Based on the life of and memoir of the same name by Jordan Belfort, who is Jewish, the title character is played by Leonardo DiCaprio, who marries Naomi (Margot Robbie) who isn’t Jewish. In real life, DiCaprio famously dated Israeli model Bar Refaeli. He’s nominated for a Golden Globe (as is the film) for his tour-de-force performance. 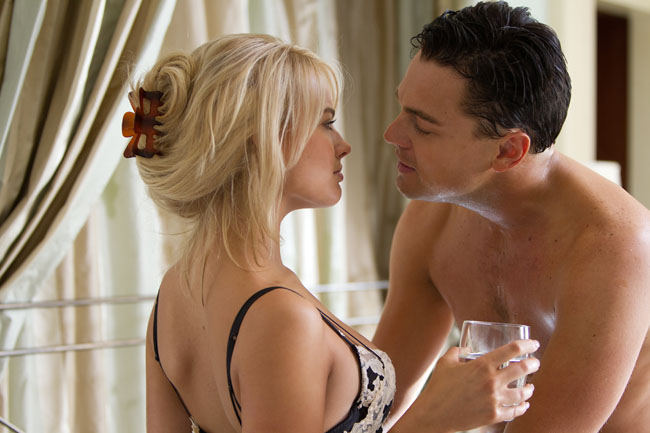 Enough Said, director Nicole Holofcener’s engaging comedy about second chance romance starring Julia Louis-Dreyfus and the late James Gandolfini, comes to DVD and BluRay on January 14, and if you didn’t get the chance to see it in theaters, it’s worth a look for its sweet story and terrific performances that show a lovely softer, quieter side of the The Sopranos and Seinfeld/Veep actors. Deservedly, Louis-Dreyfus has been recognized for both her film and TV work, receiving two Golden Globe nominations for Enough Said and Veep. Her father is descended from a wealthy French-Jewish dynasty, but she was raised in her mother’s Protestant faith and has been married to Brad Hall, who’s not Jewish, for 26 years.