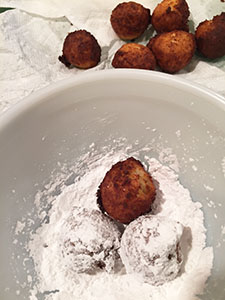 There are two stories associated with Hanukkah: One tells how the vial of oil that was supposed to last for one day lasted for eight, and the other is the story of Judith and how she saved her town from annihilation at the hands of General Holefernes by getting him drunk on salty cheese and wine until he passed out and was killed. The latter story is not often told in Hebrew school (for good reason!), but the holiday’s culinary tradition of eating foods prepared with cheese is widespread throughout Mediterranean Jewish communities.

Doughnuts, or sufganiot as they are called in Israel, are a Sephardi treat. Ponchiki, however, are traditionally made in Poland and Eastern Europe, the area where Ashkenazi Jews came from. So this recipe not only combines two culinary traditions and two cultural areas of Judaism, it also fulfills the holiday traditions of consuming fried foods and cheese.

1.  Combine the flour, baking powder and salt in a one-quart bowl. Set aside.

2.  Whisk the egg in a two-quart bowl. Add the sugar and vanilla, continuing to whisk until foamy and well combined. 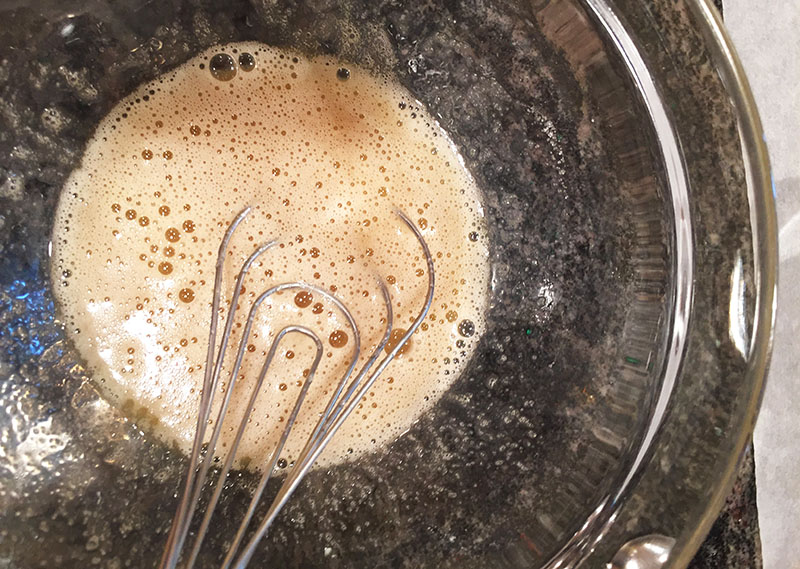 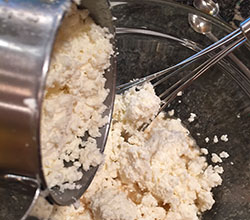 3.  Add the cheese and whisk vigorously to break it down into small particles, thoroughly combining it with the egg mixture.

4.  Add the flour mixture and stir with the whisk or a spatula until no particles of flour are visible.

5.  Heat the oil in a small, deep fryer or in a two-quart saucepan to a temperature of 375ºF. If necessary, add enough oil to come to a depth of about two inches. If you don’t have a deep-fry thermometer, you’ll know the oil is ready when a little bit of dough rolls in the oil and begins to brown. 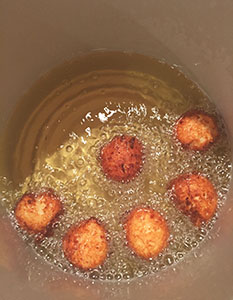 6. Using a small spring ice-cream scoop or a tablespoon and rubber spatula, scoop up some dough and drop it into the hot oil. Don’t fry more than six balls at a time so the oil temperature remains constant. Turn doughnut holes over, if necessary, to brown on all sides. Doughnuts will be done after about three minutes. If holes are browning too fast, lower the heat slightly.

7.  Crumple paper towels on a plate to drain the holes of excess oil. While still warm, toss them in confectioner’s sugar or in a mixture of cinnamon and sugar.

They are best eaten warm but will stay crisp for a few hours.

Makes about two to three cups.

1.  Bring milk and buttermilk to a simmer. Add the salt and continue to cook until the ingredients separate into curds and whey.

2.  Scoop up the cheese with a skimmer or small strainer and place in a large double-mesh strainer or colander lined with three layers of cheesecloth. Let the cheese sit so any excess moisture can drip out, then bring the edges of the cloth together and twist them to force out any leftover moisture.

3.  Refrigerate the cheese until ready to use in a recipe, or eat with jam on toast.

Tina Wasserman is the author of two best selling cookbooks, Entrée to Judaism and Entrée to Judaism for Families. A trained educator and Jewish culinary historian, Tina is a guest lecturer at synagogues and pre-schools all over the world and her hands-on cooking classes are enjoyed by children and families alike. She can be reached on her website cookingandmore.com for further information about programs.
View all posts by Tina Wasserman →