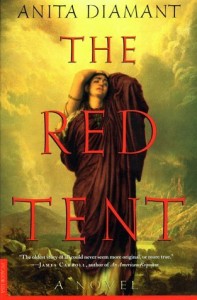 If you haven’t read Anita Diamant’s bestselling novel, The Red Tent, here is some extra incentive. Lifetime is launching what they call an “epic movie event” on December 7, starring Rebecca Ferguson, Minnie Driver, Morena Baccarin and Debra Winger based on the book. Even if it doesn’t go on your summer reading list, here are five fun facts that will make watching it even more fun. Did you know that:

1)  The book was a sleeper until Diamant got the idea to send doomed-to-be-shredded copies of the novel to rabbis who then used it in their teachings and made it a worldwide phenomenon?

2)  Diamant used the first chapters of the book of Genesis as a launching pad for her creativity, based in the silence of the character of Dina who is said to have been raped in Genesis, Ch. 34?

3)  Goddess worship in the novel is based in scholarship of the biblical period? In fact, even the Torah itself tells us of the matriarch, Rachel, taking off with the household idols.

4)  The Red Tent purposely gets the birth order of the tribes wrong? The author plays throughout the novel with the ideas of storytelling and authorship, maintaining that women were absent from the construction of the Torah and, therefore, left out of the telling of our history.

5)  Countless midwifery communities have named themselves, The Red Tent, after the novel?

And now a bit of explanation.

The Rent Tent was published in 1997 with limited success, and within a few years went from being unheard of to a bestseller. What turned it into a book group phenomenon? Anita Diamant was well-known long before the novel for those of us who help people create Jewish life-cycle rituals. She wrote several how-to Jewish books that are the first ones I recommend when someone is planning a Jewish wedding, baby naming or thinking about conversion (The New Jewish Wedding Book, The New Jewish Baby Book). But then Diamant wrote her first novel, The Red Tent, an imaginative telling of the life of the matriarchs in the book of Genesis. When the book wasn’t finding great success, the author got an idea. She sent copies of the book to Reform and Reconstructionist rabbis, many of whom knew her earlier work well, and later to women ministers and independent booksellers. Leaders found that the book opened up a much needed conversation about women in our texts and historical silence. Before long, no book group was without its Red Tent month. It became a bestseller.

You don’t have to know the story of Genesis to appreciate the book. But many readers have found that they want to crack open a Torah for the first time in eons to distinguish what is actually written in the Torah about the matriarchs of Genesis and what is Diamant’s creative retelling. She jumps off from the Genesis stories, only using them as a frame. But even the pieces she fabricated are largely based in research. Not only did she include details that come from traditional Jewish sources like the Midrash (see below), she based much of her story in research about the lives of women in the biblical period. She studied daily life in the region at that time, including ancient goddess worship, birthing rituals and midwifery, medicine and funeral practices.

The worship of gods and goddesses, for example, is rampant in her story which reflects what scholars know about near Eastern practice and is hinted at in the book of Genesis and the prophetic writings of the Torah. The matriarch, Sarah, is referred to as a priestess in The Red Tent, another gleaning from early feminist biblical scholarship. She gives names to women who are left unnamed in the Torah. She imagines that Dinah was following a tradition of being a midwife when the events of Genesis 34 unfold.

She once said of her novel, “Dinah is one of the silent women of the Bible. Her silence intrigued me…gave me a window. Where there was silence, I created three-hundred pages.” [Cynthia Dettelbach, “Entering The Red Tent With Anita Diamant.” The Cleveland Jewish News 74, no. 2(1999): 4] In her version, women tell their own stories and, at times, are frustrated at hearing them mis-told by the men in the family. She goes as far as to insinuate that the “writers” of the biblical tales made mistakes because women’s voices were not involved in the construction or transmission of the Torah.

Within Jewish circles, there has been some controversy stirred by the novel about who is “allowed” to interpret and reinterpret Jewish texts. Diamant says she wrote a work of historical fiction, not midrash (a creative elaboration of the Torah, filling in the gaps in the Torah narratives), but still some argued that her work pretends to fit into that textual tradition dating back to the Rabbis of the 2nd-6th centuries BCE. Her response to one such opponent was that, “It is my birthright. My audacity is the Jewish approach to Scripture…Every word of Torah has seven hundred faces of God and six hundred meanings. There is no one correct interpretation of Scripture as Jews have made up stories…for centuries”. [Joan Gross, “Jacob’s Daughter Hits the Bigtime in 2001.” The Jewish News Weekly of Northern California 105, no. 13 (2001): 40.]