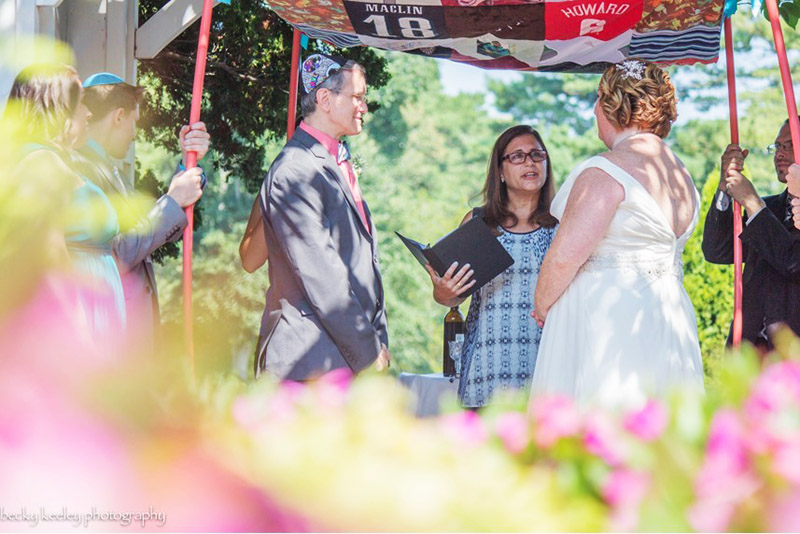 “Meet Robyn,” my friend, who is Jewish, said with a smile as she introduced me to her Christian daughter-in-law. “She’s an interfaith rabbi.”

Ugh! I cringed on the inside—the same way I do when someone calls me a Reformed rabbi (rather than a Reform rabbi) or a “Rent-A-Rabbi.” I thought to myself: I’m not an interfaith rabbi. I’m a rabbi—a Jewish rabbi. And what is an interfaith rabbi anyway? To me, the term “interfaith rabbi” sounds like a rabbi whose Judaism, and rabbi-ness, is somehow not purely and authentically Jewish.

Of course I knew what my friend intended. She wanted her daughter-in-law, who was in an interfaith marriage, to know that I was welcoming and open; that I wouldn’t judge her marriage or look down on her husband because his wife isn’t Jewish or her for being married to someone Jewish.

But still… I’m not an “interfaith rabbi.” What I am is a rabbi who proudly spends my time working with and advocating for interfaith couples and families.

There are many rabbis from the Reform, Reconstructionist and Renewal movements who officiate interfaith weddings, and we’re all regular rabbis. We’re rabbis who want to open wide the door to Judaism, and who want to bring Judaism to the most sacred moments in people’s lives. We’re rabbis who don’t judge a Jew’s commitment to Judaism by who they’ve fallen in love with and decided to marry. We’re rabbis who feel blessed to work with Jews and the people they love and who love them.

In all fairness, I realize the irony of my preferring not to be called an “interfaith rabbi” when I use the term “interfaith” all of the time. I often refer to “Jewish interfaith families” where one parent is Jewish and one isn’t, whereas the family may identify simply as a “Jewish family,” in which one parent just happens not to be Jewish. I realize that the term I, and the rest of us at InterfaithFamily use is less than ideal for a number of reasons, including the fact that the Jewish parent and/or the other parent may not see themselves as a person of “faith.” But I use it because I don’t have a better term or way of distinguishing the particular type of family with whom I work.

In my role as director of InterfaithFamily/Philadelphia, I work with all sorts of different types of families with one Jewish parent and one parent who isn’t Jewish, all of whom have a variety of blessings and challenges as a result of the parents having different religious backgrounds. I use the blanket term “Jewish interfaith family” not because it’s ideal, but because it helps—hopefully—to make clear who these families are.

I realize that my friend who introduced me to her daughter-in-law was trying to do what I do: to describe what type of rabbi I was in a short-hand form, limited by the language we have. I know what she really meant was that I’m an open-minded rabbi who works with interfaith couples and families, and she felt that by just saying “rabbi,” that wouldn’t come across.

While it still may make me cringe on the inside, and I’d prefer that you didn’t, I will say that if you really have to, go ahead and call me an “interfaith rabbi.”

But still please don’t call me a Reformed rabbi or a “Rent-A-Rabbi.”

4 thoughts on “I’m not an “Interfaith Rabbi””