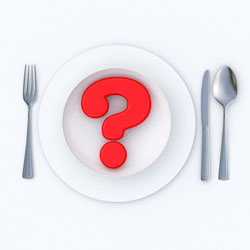 Following a special diet can be a challenge. Most of us have followed a diet in the past to lose weight, or for humanitarian or health reasons. Some of us are on one right now. In my own small circle of family, friends and colleagues, almost all of the major diet categories are covered. We have gluten free, low fat, dairy free, sugar free, vegan, vegetarian, Kosher, high protein and low carb. Passover is coming and my diet-centered world is about to short circuit. What kind of meals can I make if I have to eliminate gluten, fat, dairy, sugar, eggs, meat and all of the items that are not consumed during Passover from the list of acceptable ingredients?

There can be some confusion about how to make our choices about what to eat during Passover. Tradition plays a strong role for religious Jews and can influence the decisions we make in our modern interpretation of our holiday observance. Jews from Eastern Europe (Ashkenazim) refrain from eating Kitnyot (KIT-NEE-OT) during the eight days of Passover. Kitnyot are grains and legumes such as, rice, corn, beans, soy, peanuts, string beans, peas, lentils, mustard, seeds (sesame, poppy, sunflower, etc.), and their derivatives which can be found in corn starch, corn syrup and soy sauce. Jews from other lands (Sephardim) do eat Kitnyot during Passover. Why is there a distinction?

The Torah tells us not to eat leaven (also called Chametz) during the holiday of Passover. Chametz consists of “five grains” from wheat, spelt, barley, oats and rye. In ancient times, a strict observance of this commandment caused the Jews in lands where these grains were grown to be extra careful. All grains were stored in the same type of sack and could be easily mixed up or misidentified. The only way to be sure of not eating the five grains was to avoid any foods that could possibly have a similar appearance. Sephardim did not have this tradition because the five grains were not grown in their lands.

A little research on the Internet results in some obscure and interesting items to avoid during Passover. Who would have known that organic lipstick may contain wheat or oat flour? We must also avoid eating anything that contains vinegar like ketchup, mayonnaise, and pickles, anything with glucose or dextrose, such as sugar alternatives, and decaf coffee and tea, which are processed using an additive called Maltodextrin, which is made from starch. Whisky and beer are also prohibited because they contain wheat or barley.

There are some very good menu and recipe suggestions available if one is willing to dig around a bit on the web. Daniella Silver has a list of Healthy Gluten/Dairy Free Vegetarian Passover Recipes that look very yummy. I am definitely going to try the Garlic Sweet Potato Rice and the Triple Chocolate Hamentaschen. My favorite site is from Shana Lebowitz called 34 Healthy Passover Recipes and it is full of interesting Passover relevant twists on regular dishes. Try her Grain-Free Banana Bread (it does include eggs) or the Bitter Herbs Salad that she found in a 2012 New York Times post.

It is a highly personal decision to change our diet for eight days. Whether or not you give up just bread, bread-like foods, or choose to follow all of the ancient traditions is up to you. Please share your favorite healthy Passover recipe with our readers so that we all have more food options to consider as we decide what our own unique celebration will entail.

View all posts by Marilyn Wacks →