As the new year approaches, I’ve been thinking back over the past year—particularly about certain terms I’ve heard used in 2014 that bother me. Following are three terms I hope to hear less of in 2015.

NON-JEW: While “non-Jew” is an easy short-hand term and it’s clear what it means, this term can be offensive. Most people prefer to be described in the positive as what they ARE, rather than in the negative as what they’re NOT. For example, I identify as a “female,” not a “non-male;” and in my family I’m a “wife and mother,” not a “non-husband and non-father.” At InterfaithFamily, we’re concerned that when people in the Jewish community talk about “non-Jews” in interfaith relationships, it sends the message—even if it’s interpreted subconsciously—that the person who isn’t Jewish is somehow “less than” by defining that person with an emphasis on his or her “outsider” status.

Granted, not using the term “non-Jew” can sometimes cause us to have to do some linguistic gymnastics, but I think it’s better to sound a little wordy and awkward than to potentially offend someone. So far, I don’t know of an ideal term to describe someone who isn’t Jewish. One suggestion I’ve heard is PDF (“person of a different faith”), but that term has its own limitations in that the partner who isn’t Jewish may not identify as part of another religious group, or may be an atheist of agnostic who doesn’t have a “faith.” Do you have any suggestions?

And for the record, I’d love to never again hear terms like shiksa and goy. These terms, which simply mean, respectively, “a woman who is not Jewish” and “people who are not Jewish,” are too often used by Jews in a pejorative manner. 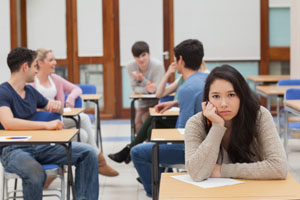 HALF-JEW: I used to really dislike this term no matter what the context in which it was used. But now I’ve come to see a difference between using it to define oneself and using it to define someone else. Before I worked for InterfaithFamily, if I were teaching a religious school class at a synagogue and a boy with one Jewish parent told me that he was “half-Jewish” I would probably have said something like:  “You’re fully Jewish. Just because one of your parents isn’t Jewish doesn’t make you ‘half-Jewish.’” (If the boy were older, I may even have joked: “which half, left or right?”) But as my colleague Rabbi Ari Moffic, Director of InterfaithFamily/Chicago, pointed out to me when I came to work here, people have the right to self-identify, and if someone identifies as “half-Jewish” it’s not my place to tell him otherwise.

While I may have a tendency to want the boy in my religious school class to feel “whole” and to know that he is “authentically” Jewish even if one of his parents isn’t Jewish, identity is complex. There are many things that a child (or, for that matter, an adult) could mean when he says that he’s “half-Jewish.” Perhaps that’s his way of saying that he loves and identifies strongly with his parent who is not Jewish and that parent’s family. It’s not my place to tell him that the way he self-identifies is wrong.

Yet while I now wouldn’t “correct” someone who identifies herself as “half-Jewish” because of her right to identify as she chooses, I do find it offensive when people label others as “half-Jewish.”  In my—admittedly liberal—understanding of Judaism, a person with a Jewish parent is Jewish, regardless of the gender of her Jewish parent. (I recognize that this view, which is consistent with the views of the Reform and Reconstructionist Movements, is inconsistent with traditional Halacha (Jewish law), and is not accepted by the Conservative Movement and Orthodox Jews, who require that a child’s mother must be Jewish in order for the child to be Jewish without being converted.) And such a person is as “fully Jewish” as any person with two Jewish parents. Labelling someone a “half-Jew” can be very hurtful to them (see, for example, Zach Cohen’s blog “Don’t Call Me a Half-Jew”) and risks alienating children in interfaith families from their Jewish roots.

Which brings me to the third term I don’t like…

PATRILINEAL JEW: Traditional Jewish law requires that a person’s mother be Jewish in order for him to be Jewish without converting. But for years now the Reform, Reconstructionist and Humanist Movements have recognized “patrilineal descent” (i.e. a child with one Jewish parent, regardless of the parent’s gender, is Jewish so long as certain other criteria are met). CLICK HERE for an explanation of “Who is a Jew?”

Nobody ever refers to someone whose mother is Jewish and whose father isn’t Jewish as a “matrilineal Jew”—such a person is simply a “Jew.” Similarly, those of us who accept patrilineal descent shouldn’t refer to someone whose father is Jewish (or who is being raised by two fathers, for that matter) as a “patrilineal Jew.” The modifier “patrilineal” is unnecessary, and implies that having a Jewish father, as opposed to a Jewish mother, somehow puts one into a different, less authentic, category of Jewishness.

My hope for 2015 is that we can all spend more time focusing on our own religious and spiritual lives…and a LOT less time worrying about defining everyone else’s.

Are there terms that you’d like to leave behind in 2014? I’d love to hear what they are.