Thirteen years ago I married a Catholic man from Chicago. I was raised as a Conservative Jew north of Boston. We met through mutual friends when I moved to Chicago. Prior to getting married, my husband and I agreed that we would pass along both of our religious beliefs to our children; we both had strong ties to our religious traditions and wanted to share these with our family. We had joined an interfaith couples group, based in Chicago, to help us discuss and navigate issues that come along with building a dual-faith family. We weren’t sure how this would all turn out but we were committed to this plan.

While we have achieved a lot over the past 13 years, it has been a long road filled with challenges, doubt, guilt as well as learning, joy and celebrations.

When my husband and I decided to marry, my family was less than thrilled. They had always wanted me to marry someone Jewish and I know they felt they had failed when I chose someone outside of my religion. My husband’s family is not very religious and didn’t pose any objections to our interfaith union.

During our wedding planning, the interfaith couples group provided resources. Through these resources, we were able to create a wedding ceremony which incorporated both Jewish and Catholic prayers and traditions and reflected our decision to celebrate both of our faiths. We originally wanted to have both a priest and a rabbi co-officiate at our wedding, but when the rabbi couldn’t be at the ceremony until 30 minutes after sundown, my mother put her foot down and was insistent that our ceremony start right at sundown. In actuality, I know that she was uncomfortable having a priest at the wedding and knew we wouldn’t have the priest if we didn’t have a rabbi. She was right—we couldn’t find another rabbi.

We ended up having my uncle and a good friend of my husband’s family officiate at the service. We had a very beautiful and personal wedding and still achieved our goal of incorporating both of our religions. In hindsight, I wouldn’t change a thing. 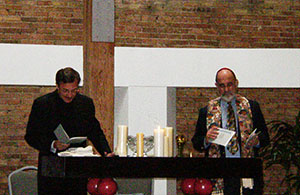 The wedding planning gave us our first taste of the challenges we were about to experience as we embarked on this dual-faith path. This became obvious after we had our first child, Sam, nearly a year later. We decided to welcome Sam into our lives and into our faith communities through a baby naming/baptism ceremony where Sam would receive his Hebrew name and be baptized. There would be a rabbi and a priest officiating. Again, the interfaith network in the Chicago area provided us the resources to participate in such a ceremony.

Our excitement to take this first big step to being a dual faith family was overshadowed by my parents’ outspoken objections. My parents viewed this as a solely Catholic ritual despite the fact that Sam would also receive his Hebrew name. Their reasoning was that a baptism in the Catholic faith is a much more important event than a baby naming is in the Jewish religion; the two didn’t hold equal weight. They couldn’t see that we were participating in the ceremony as a way to have Sam welcomed into both of our religions. They could only see that my son was being baptized by a priest.

I tried having the officiating rabbi speak to them before the ceremony but that proved unsuccessful. They were struggling to understand what we were trying to do and didn’t think that it was even possible to give a child both religions. They thought that the children would be confused and I think they feared that because Catholicism is the more prominent religion in our country, my children would naturally gravitate toward that and wouldn’t identify with Judaism at all. At that point, I wasn’t yet confident about how this would all turn out either, so my arguments were less than compelling.

Needless to say, there was definite trepidation going into the weekend of the ceremony. My parents were coming to stay with us for the weekend and I was extremely nervous about how this was going to go. My one saving grace was that my brother came in as well, so I had some support on my side. My brother had also married someone Catholic and they had just had their first child shortly after we had Sam. He wasn’t sure at that point how he was going to raise his children, and while he has since made a different choice than ours, I knew he understood that we were trying to do the best for our family.

Despite all the chaos, the ceremony was wonderful. It was so warm and welcoming with a strong emphasis on making family from both religions feel welcome and recognized. The clergy talked about how lucky these children were to be raised in the very best of our two faiths and traditions, and my husband I agreed wholeheartedly.

I was so proud of our decision to be a part of this rite. Naively, I thought for sure that witnessing this would soften my parents’ opposition. It did not and I was crushed. We made it through the celebration back at our house where I had a cake that only said “Congratulations” with no religious symbols or references. And I cringed every time my husband’s family unknowingly referred to the ceremony as a baptism. I knew my parents had noticed, too.

That evening was tense and we had words. We each gave our points of view and couldn’t see eye to eye.  My parents left the next day on a sour note and I felt very guilty that I wasn’t pleasing them and for pursuing a path that they disagreed with. I didn’t know how to appease them and still follow my belief that providing a dual-faith family for our children was the right choice.

We have since had two more children: Sarah who is 10 and our youngest, Rachel, is 7.  We had baby naming/baptism ceremonies for both girls and we didn’t invite my parents to either of these celebrations. We wanted these moments to be happy and special without the tension that we had experienced at Sam’s ceremony.

In the end, I realized that I couldn’t appease them. This was going to be a journey that we were both going to go on. Our paths will not be the same—they may split, join, cross, and maybe sometimes converge. It will be a journey with hills and valleys filled with more hard times and more joys but we will all have to learn and grow at our own pace. I hope that somehow we will come to an understanding, even if we never agree.

InterfaithFamily provides many helpful resources and connections. Click these links to learn more about interfaith weddings, parenting, holidays and more. Read more of our blogs, too.

3 thoughts on “Celebrating Two Faiths Without My Parents’ Blessing”