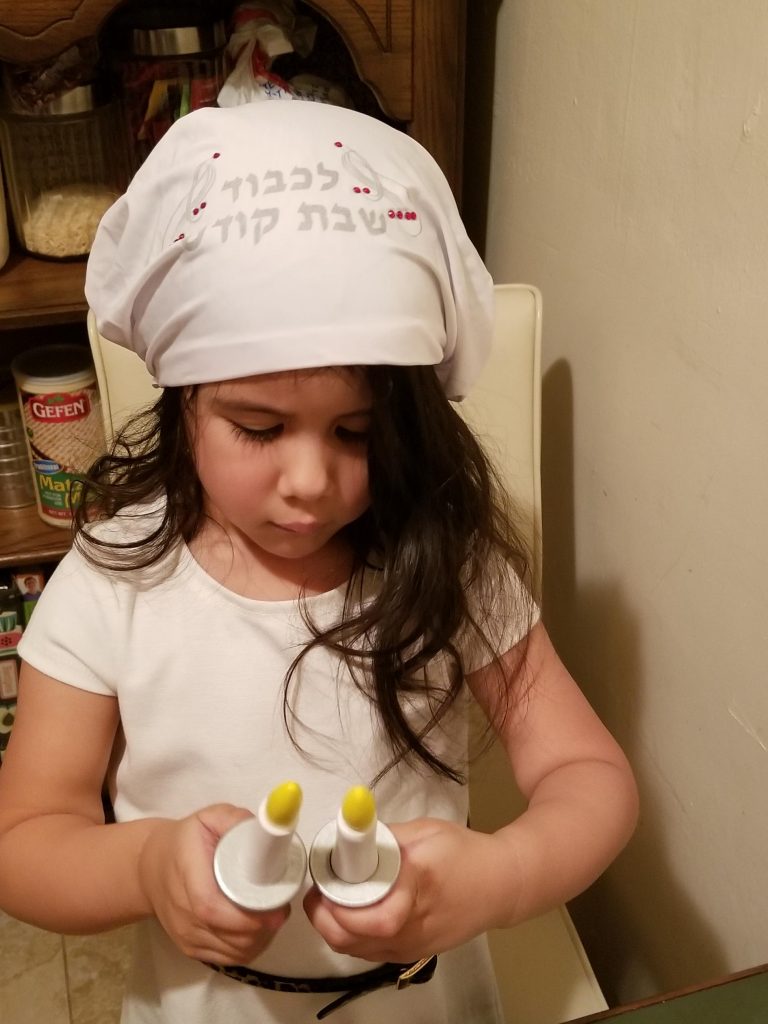 My apartment has become a secret cave of imagination. Sometimes it is the park where Peppa Pig plays with her friends and family. Other days it is a dance studio where my two little girls balance on the coffee table until they pirouette off and onto the wooden floor, which has ultimately transformed into a PJ Masks episode. But, on Friday nights we have turned the apartment into a spiritual sanctuary where all religions, cultures and backgrounds are welcome. In order to improve the state of the world, maybe starting at home is the first step.

I am an American Jew. The love of my life, and father of my children, Adrian, is a Mexican Catholic. When we first met we thought that our differences would break us. Instead, our family has flourished into a well-rounded, complex tribe. Our bedroom is painted a dark maroon with an off-white finish. Our living room is a calm grey with the Hebrew alphabet taped high up on the wall. The Virgin of Guadalupe arches above a play space as a form of protection over our little ones.

The Jews call Friday night sundown until Saturday night sundown “Shabbat”—the Sabbath. Adrian has renamed this weekly tradition and refers to it as “Chabba,” only the way a man from a Mexican Catholic background can.

Shabbat or “Chabba” in my neighborhood is an event. Early Friday mornings women and men line up outside the kosher bakeries down the block waiting to buy fresh challah bread, sweet rolls, chocolate danish and cinnamon buns. Jewish boys and girls come home early from school and the avenue is packed with traffic. Shabbat is supposed to be a day of rest, and so before the sun sets the shopping for Shabbat must be done. Cooking must also be done, and everything must be done before a certain time in order to completely relax and give thanks to God for the week behind and the weeks that still lie ahead. Orthodox Jews don’t drive, they don’t use electricity on Shabbat and on Friday nights and Saturday mornings they walk to synagogue.

I decided to start celebrating a real Shabbat dinner when one of my former students told me she had to run home to bake a challah. She’s an Israeli Jew, not religious, but she mentioned to me that the feeling she gets from cooking a Friday night dinner for her family is something she can’t explain. “You should do it,” she said. “But, Adrian is Catholic,” was my answer. She laughed, “that just means he’ll love it even more. Doesn’t he love all of the Jewish holidays? People who aren’t Jewish always love Jewish traditions more than Jews.” Good point. Adrian loves Passover, Rosh Hashanah and everything in between.

My first Shabbat meal was traditional. I roasted a chicken, I made potatoes, Israeli couscous, carrots with pomegranate molasses, a salad and an apple torte. Everyone came over and Adrian asked me if I would do it every Friday. I am happy to say that this new tradition has not stopped since my student implored me to try it. Now, every Friday I do a big shop, I clean the house and I start cooking. My Shabbat table has new candlesticks (one Friday night tradition is lighting the Shabbat candles and saying a prayer over them). I am also amazed that Helen, my older daughter who is 3-and-a-half years old, has learned the Shabbat prayers just by hearing them. Alma, my 18-month-old says “Chabba, Chabba!” just like her father when we sit down to eat.

I think that often, as a parent committing to an interfaith household, I am always focused too much on the future. What will my children believe in when they grow up? Who will they want to become? How will they learn Hebrew and Spanish and their alphabet in every language, and everything else they need to know? Shabbat has taught me to slow down. It’s not just a Jewish tradition. Friday night dinners used to be an American tradition as well. Every culture has some kind of a Friday night dinner, even if it’s not on Friday. Shabbat is about sitting down with the family and instilling values, having conversations and deepening the relationships we already have with our loved ones. Our children do learn from example. They really do.

One Friday night I asked my mother if we ever did Shabbat dinners when I was a child. “What do you mean?!?” my mother screamed, “we did them every Friday! I can’t believe you don’t remember. See, that’s your selective memory!” It was true I had forgotten but not because those nights weren’t important. When my father died we stopped doing Shabbat. A bit of tradition died with him, and so my memories before my father’s passing are blurry. As children we don’t get to decide when tragedy will hit. But, as adults we can take what we learn from tragedy and make it into something positive for our own families.

Friday night has become a staple in my family. We light candles, we say the prayers, my mother brings flowers and wine, we sit down for dinner and then we have dessert in the living room. So that long forgotten tradition from my own childhood had really been there all along, yearning to get back to the humble basics of life. After dinner my daughters and nephews play games, a picture of my father hangs on the wall while the Virgin of Guadalupe looks on in delight. I look around at this new beginning: a first step in fixing the world by focusing first on the small world that exists in my apartment.