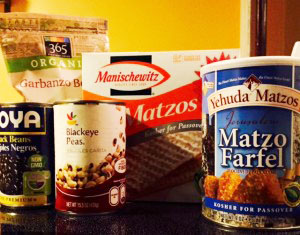 Recently, two important Conservative rabbinic opinions came down that probably rang out strongly with their followers. For the rest of us,the announcement quietly gathered steam until it called out across the masses in the weeks leading up to Passover: the Rabbis declared kitniyot (Hebrew for legumes) as Kosher for Passover.

In what felt like overnight to me, a group of Jewish leaders told us Ashkenazis (Jews of German or Eastern European descent) that it was no longer necessary for us to belabor the possibility that a farmer who wasn’t Jewish had mixed wheat in with the lentils, and that as long as we stay away from chametz, legumes are fair game. Much to my surprise, after 20+ years of label reading and black bean-shunning, I feel mixed about an easier Pesach.

I am not a Conservative Jew. I am a Reform-leaning Jew held in the warm embrace of a Reconstructionist community, so I am homing on two bases, neither Conservative. But this seems like a big deal, since I have owned this more “conservative” practice since college. Also, to have such a public overturning of a centuries-old practice feels like a challenge for everyone, Conservative or otherwise.

On one side of my emotional spectrum is the urge to listen. For almost as long as I’ve practiced the ban on kitniyot, I’ve known it to be based more on an abundance of caution than on biblical clarity. I’ve also known it to not be the healthiest choice for my body–I will never forget the time I had to have a blood test during Passover and the doctor’s dismay at my abysmal iron levels (made worse because I was a vegetarian at the time). I assured her they’d bounce back after the holiday, which they predictably did. So enough already–life without the kitniyot ban sure sounds easier, and the argument for it is thin at best.

On the other side, there is a part of avoiding kitniyot that I find adds even more meaning to the eight days of Passover. Perhaps I am too much of a glutton for punishment, but I like how additional rules increase my mindfulness about this time being different. I am not a huge bread eater, so avoiding kitniyot added another layer to the way I paid attention to what I was consuming, which, in turn, made me think even more about the why of the holiday. In incorporating kitniyot into my diet, I feel like I need to find a new way to ensure the same quality of mindfulness I have had in the past several years.

In the middle is the way I hold this change in my role as the Jewishly-raised partner in my interfaith marriage. There is something in this that feels a little funny.  Because our Judaism originated from my background, I often assume the role of leader or teacher. I can get my head around this when we observe Shabbat, fast on Yom Kippur or with almost everything related to Passover. But when a panel of rabbis picks something that I’ve suggested my partner do as a part of being Jewish and says “Oops, not really,” I feel a little like I tricked my family into something unnecessary. I know it is not that cut and dry (Eric assures me it isn’t), but I am reminded that advocating for the Jewish choice for our household comes with some additional responsibility to shine a good light down the Jewish path.

This week, with a little hesitation, I have decided to stop worrying about kitniyot. Halfway through the holiday, it turns out my belly feels better off without an additional layer of forbidding myself kitniyot. I am curious, though – what did you decide to do?