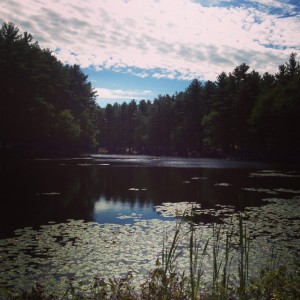 Tashlich, the Jewish New Year practice of symbolically casting our sins off into the water, was not something I knew much about growing up.  It is a practice I have come to enjoy as an adult, however. There is something both powerful and relieving about the physical opportunity to throw away your digressions, even in the form of breadcrumbs (although we now know that oats are better for fish, or not feeding them at all but tossing a stone instead).  It is also a nice tradition to embark on as a family; to take a walk around a river or lake; to be in nature together and enjoy the early fall weather as we observe the holiday with an activity that everyone can participate in in some way.  This year’s journey to the Charles River has me thinking a lot about the act of practice and how a new focus on that concept can be a guide to successful resolutions and growth in the new year.

After Rosh Hashanah services this year, I rallied my girls and my extended family to take a walk to the river for tashlich.  We stood by the water and lined up, bits of crackers in each of our hands.

I was glad to have something for Chaya to do that would be marginally spiritual but mostly just a chance to be with family and throw some things – always a winner for my three year old.  But for Ruthie I had high hopes.  She had this monumental first year of sunday school and four weeks into first grade, she is making mental leaps and bounds of which I am in daily awe.  I got ahead of myself imagining how she’d talk about being a better listener; a nicer friend; a more caring big sister.  I even went so far as to think about how cute those things would sound right here in my blog.

“Throw a piece of cracker in the water, sweetie, and say something you want to do better next year,” I encouraged her.

“I want to be a better reader!” she said, throwing her first crumbs.

Not quite what I had in mind, so I tried again.

“Something you don’t do so well now, that you are hoping to change,” I suggested.

“I want to ride my bike without training wheels!” Another crumb in the water.

I smiled at her aspirations, and I thought about stopping her.  Going deeper than I had planned into the concept of sin, or even suggesting to her something I thought she could improve.

Then I remembered the old adage about parenting being a marathon, and not a sprint and that really doing something from the heart takes practice.  This year, when I talked about doing things better, Ruthie thought about her skills.  Next year, she may interpret my instructions differently.  Or she may not – at least not yet.  We don’t do our traditions, we practice them.  She has to practice Tashlich, and my hope is she’ll have the chance to practice it for a long time.

On Rosh Hashanah afternoon, I stopped myself from getting in my own, and I let her name a few more skill building hopes.  Then I took my turn alongside and threw in crumbs for less screen time during family time, for being a more patient parent, for appreciating the people I love more and a few more things.

Since that day, though, I have been pondering the idea of practice.  Because it doesn’t just apply to Rosh Hashanah, or to our spiritual beliefs.  We can’t change overnight, and luckily we usually get more than one chance to try to do things better.  So whether it is Tashlich or how I manage my low energy reserve at bedtime, I am going to try to remember that learning something different takes practice.  If the universe allows it, I will get another year at the river.  In the interim, I am not going to be better, I am going to practice being better – right alongside Ruthie as she sheds those training wheels, too.

One thought on “Resolving to Practice”