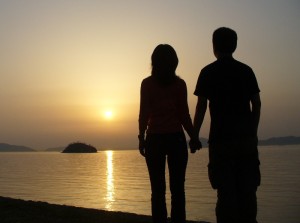 Over winter break, an Jewish friend who is married to someone Jewish told me that her son was no longer dating the nice Jewish girl from his summer camp. He was now dating a not Jewish girl from his high school. I could tell my friend wasn’t enthusiastic about the relationship.

The following week, I received a message from another friend in a Jewish-Jewish marriage with two teenage sons. She had just read about the decision by the USY board to drop its policy prohibiting teen board members from interfaith dating. She asked if I could write about the topic since dating was an extension of the intermarriage conversation.

I sensed that both of my friends were a little anxious about the subject even though they were Reform Jews with open minds, open hearts, and intermarried friends that live Jewishly. I also sensed that they weren’t sure how to talk about interfaith dating, and no one was discussing it with them either. My friends were looking for information and some guidance.

This post is for them and other parents who are navigating teenage interfaith dating. Dealing with adolescent romance is not easy, and the issues of Jewish continuity and intermarriage can add a layer of stress. Here are few things for parents to keep in mind.

Few high school couples marry. Estimates suggest that high school sweethearts comprise only 2% of new marriages, and a 2006 Harris Interactive survey found that only 14% of respondents age 18-27 met their partner in either high school or college. With dating abuse receiving much attention of late, it is more important that your child is in a healthy, positive adolescent relationship than a relationship with someone of the same faith. Talk to your teens; teach them how to date, how to respect themselves and others, and how to protect themselves from abusive behavior.

Critical Jewish experiences are better predictors of future Jewish engagement than the faith of a romantic partner. I note in From Generation to Generation that the level of Jewish activism in a home–ritual observance, Jewish education and social networks–is a stronger predictor of Jewish continuity than the faith of a love interest or marriage partner. Do you regularly celebrate Shabbat and other Jewish holidays in your home? Do your teens participate in Jewish education post-b’nei mitzvah? Are they involved in Jewish youth organizations and activities? Do they attend Jewish camp? Has your family or teenagers traveled to Israel? Do they have Jewish friends? Answer “yes” to some or all of these questions and it’s likely that your children have a solid Jewish identity and will choose to make a Jewish home, regardless of the religious identity of their mate.

Telling your children “don’t” won’t ensure Jewish continuity. In From Generation to Generation, I quote an Orthodox father of five who says, “Guaranteeing Jewish identity is the sum of everything you do when you raise your children. It’s not just telling them don’t.” Simply prohibiting interfaith dating won’t make Judaism important to your children and unless you plan to arrange your child’s dates, you have little control over the identity of his or her romantic partners. But you do have influence. According to Sylvia Barack Fishman, author of The Way into the Varieties of Jewishness, parents have the biggest impact on their children’s Jewishness when they are involved in and show a strong commitment to Jewish activities and regularly explain in an honest manner why they engage in Judaism. Talk to your teen about why Judaism and its continuation is important to you. Share your hope that he or she will want to have a Jewish home and raise Jewish children irrespective of the faith of their partner. Don’t just do this once; make it an on-going conversation. Show them that you mean what you say by engaging in Jewish life in your home and community.

Welcome the stranger. Make an effort to get to know your child’s not Jewish boyfriend or girlfriend and create opportunities for him or her to learn about your family and your child’s upbringing. Invite them to join you for Shabbat dinner, a Passover Seder or High Holiday meal. Ask them to participate in your Hanukkah celebration. Use these occasions to expose your child’s beau to Jewish life, show them that Judaism is important to your family and give them insight into a different tradition. These experiences are an opportunity to break down stereotypes and build understanding and acceptance.

Interfaith dating during the teen years is part of teenage social experimentation, but it can be difficult for parents. Preventing interfaith dating is unrealistic and fearing the future you have little control over is unproductive. Focus your energy on influencing your teen’s connection to Judaism by planting Jewish seeds, nurturing them often and talking about the importance of Judaism in your lives. Not only will this help strengthen your family’s ties to the Jewish faith today, but it will increase the chances that Judaism will continue to blossom through your children tomorrow.

View all posts by Jane Larkin →