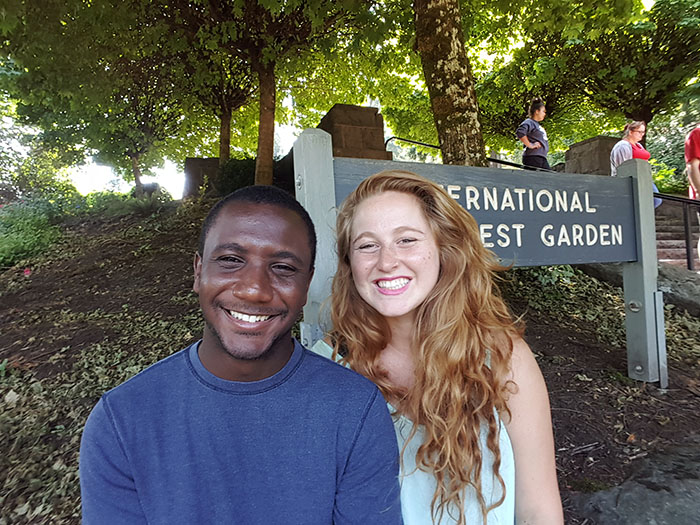 I had been living at Moishe Kavod House (a home-based Jewish community for young adults) for about a month when my boyfriend, Courtney, and I decided it would be exciting for him to accompany me to Shabbat services. The gatherings are always well-attended by lots of friendly folks, so I figured it would be a perfect way to introduce him to the beauty of Shabbat. I brought Courtney up the stairs to the services and we took a seat together on the floor. The services began, and although I had prepared him for the Hebrew prayers and songs, I had forgotten just how challenging it can be to follow along in a Jewish service if one is unfamiliar with its choreography and language. Each time we would rise, or bow, or face toward the door, I would hastily try to signal to him what was happening, but it was always a moment too late. Our visibility as an interfaith couple was clear, but it was made even more clear by the fact that Courtney was one of the only people of color in the room.

Once services ended, we connected briefly before heading downstairs. I asked him how he was feeling, and he explained to me that despite the warmth and kindness of all the people he had met, it was hard to shake the feeling of being an outsider. We spent the rest of the evening meeting community members, eating delicious food and discussing the powerful d’var that a local social justice leader had given. But he and I were left with a lingering feeling of otherness. We were full of questions as to how we might be able to attend such an event with both of our full identities intact.

A few months after that Shabbat dinner, we flew to Atlanta to spend Thanksgiving with Courtney’s family. At that point, I had never met anyone from Courtney’s family, so spending the week with his immediate and extended family felt daunting, but exciting. I was prepared to feel a stronger sense of difference than usual, given that I would be the only white person there. Before the Thanksgiving meal, we stood in the guest room as Courtney assuaged my anxiety about meeting his extended family. Confident that the most important point of difference would be drawn across racial lines, I geared myself up for an evening of relative discomfort.

However, when I stepped out of that guest room, Courtney at my side, I found that I was completely wrong. His family welcomed me with open arms. To my surprise, there were only two moments that felt heavy and slightly uncomfortable. The first of these moments came when the family sat down with overflowing plates to say grace before eating, offering praise to the Lord, the Son and the Holy Ghost with a painting of the Last Supper in the background. Needless to say, at that moment, I was hyper-aware of being the only Jewish person in the space. The second moment came when Courtney casually mentioned to one of his young nieces that I work as a Jewish educator in Boston. She turned to me with wide eyes and said, “Are you a Jew?” In response, I laughed and said yes, and proceeded to answer her questions. I was taken aback by her shock until I realized that she has probably never encountered a Jewish person before, whereas of course my whiteness was unremarkable to her. When we flew home later that week, I was pleasantly surprised by how comfortable I felt with Courtney’s family, and interested that the primary point of difference had seemed to be religious.

I believe that these two experiences—attending a Moishe Kavod Shabbat with Courtney and spending Thanksgiving with his family—highlight critical, surprising truths about being in a relationship that is both interfaith and interracial. Our most important difference as a couple is neither racial, nor gendered, nor religious, nor socioeconomic, rather it is a fluid meeting and shifting of those identities and experiences. There is no hierarchy or primacy of identities. Instead, there are only shifts in context and experience that dictate which of us may or may not feel comfortable in a given situation.

I have given much thought to a feeling of otherness as Courtney and I navigate a relationship that many perceive to be built on difference. We attract quite a few stares and whispers when we are out in public and even though by now we are accustomed to sometimes rude responses, we refuse to adopt such a simplistic view of our differences.

Courtney and I met nearly six years ago when we were both undergraduates at Carleton College and throughout our time in school we became deeply, powerfully connected to one another. We see ourselves as interconnected, intertwined; in short, we do not perceive our relationship to be one focused primarily on navigating difference. The intersectionalities of race, gender, class and religion absolutely play a prominent role in our relationship and our related experiences—but even so, that feeling of otherness still feels like an imposition from the outside world.

Each and every day, I feel proud to be grappling with these complex questions about belonging, identity and community. I am excited that we draw from two rich, beautiful religious traditions as we shape our life together. We are blessed to be doing this work in a world that seeks to delineate inflexible categories based on race, gender, class, religion and so many other visible and invisible identities. Honoring our connections while maintaining and celebrating our differences is challenging, humbling, heart-opening, holy work. How blessed we are to be struggling and striving to be better for ourselves and for the world.

One thought on “Our Most Important Difference”