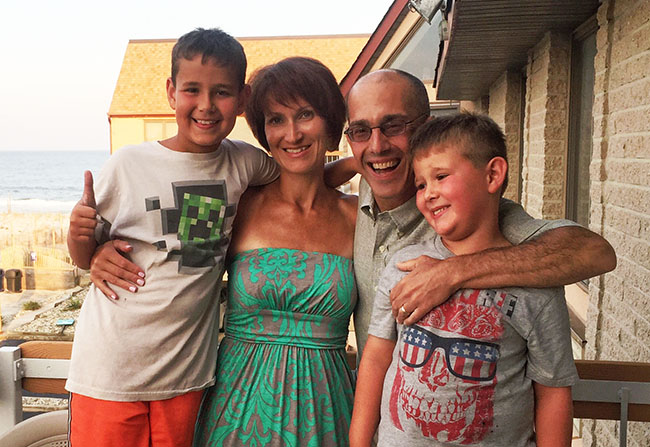 This blog post was reprinted with permission from Red Said What?

Larry and I struck our deal over Sicilian pie.

“Turn Jew and I’ll marry you.”

“Then raise the kids Jewish.”

Bringing up nonexistent children in a faith other than my own seemed easier to digest than lukewarm mozzarella.

One civil ceremony two children, and 15 years later Larry and I have put some mileage on our interfaith marriage bus since that momentous meal.

Turns out, there are many of us traversing a similar highway.

Hoping our collective experience might offer insight to couples merging toward the on ramp, I reached out to a handful of drivers in my lane. Together, we created a travel guide we wished someone had stashed in our glove compartment years ago.

A clear belief system is the anchor for future decision making.

Flushing out what spiritually, culturally and religiously, if anything was important to me: not extended family, not community, but me, before I was in a committed relationship would have saved me years of agita.

Fear is at the root of all issues interfaith.

Jill, who is married to a Jewish man, raised Jewish children, and is active in her church and synagogue believes, “If you are strong in who you are, then there is nothing to fear. Notice when you feel threatened and investigate within yourself.”

Individual identities are often clarified and strengthened when one is in an interfaith relationship as its nature requires each party to listen, reflect and respond regularly.

I still hear Larry say, “Marrying outside my faith made me a better Jew.  It puts me in a position to think about what matters.”

4. Your Children Will Always Be Yours

After our son’s bris, an outsider remarked, “He should go to the mikveh. It’s part of the deal.”

I felt torn between the conviction to do right by Larry’s conservative upbringing and dread that my child’s formal conversion would jeopardize our mother-son bond.

In search of guidance, I went to see a Reform rabbi. She explained the difference between Reform, Conservative and Orthodox interpretations regarding matrilineal descent and ultimately offered, “Think of bringing your baby to the ritual bath as a beautiful rebirth.”

Screw that, I thought. What was wrong with his first one?

My son never made it to the mikveh but believe you me, the kid is all mine. And when it comes time for him to stand on the bimah as a bar mitzvah, this Catholic mom will beam with pride.

Whether it’s before the nuptials or on the second date, but definitely before babies make an appearance: decide. How will you raise the children?

Will your family choose one religion, formally teach two or like Laurie who is one-half of an interfaith and intercultural couple, celebrate and observe all holidays and life cycle events with a focus on spirituality, values, tradition and gratitude?

The plan will likely change, but a shared vision will minimize confusion, create the structure and identity children crave and help all parties feel safe.

Stacey, a proud Italian who was raised Catholic and her husband, a Conservative Jew, decided to raise their children in the Jewish tradition. He was responsible for schul (synagogue)-shopping and schleps the kids to Hebrew school. She holds court during the holidays and planned each child’s bar and bat mitzvah celebrations with care.

Laurie and her spouse deem it the responsibility of the parent whose tradition is being celebrated to teach the children about it in a meaningful way.

Regardless of approach, each person takes a turn behind the wheel.

When my children were young, I was fortunate to find a local interfaith group. During our regular “Coffee Talk” meet ups, we kicked around ideas, vented, listened, sought validation and offered guidance. These women and men were my leaning post and sounding board.

After agonizing through years of Hebrew laden Rosh Hashanah services and prayer-heavy meals with extended family, I cracked. “This is not my holiday. I don’t get it. It’s too much and I’m not going anymore.”

My outburst and subsequent conversation with Larry gave us permission to create a tradition where we each felt included and able to derive meaning from the environment. We started with a relatable rabbi, the children’s service at our Temple, and a meal with friends and have since graduated to grown up services and food with Larry’s family.

Larry, who was raised in a moderately observant home, had a post-decorating nightmare after he participated in my mother’s Christmas tree trimming party for the first time.

When we decided to put up our own Christmas tree a few years ago, I brought home a modest bush, concerned that a grand statement might make him squeamish. Larry gave our five-footer the once over, examined the nine foot ceilings and announced, “This tree doesn’t do the room justice. Next year it has to be much bigger!”

10. Give Extended Family a Chance

Let extended family on the bus. Offer to take a ride with them. Prepare a kosher meal. Attend a mass. Kindness, sensitivity and respect breed growth and mutual acceptance.

Jill feels being part of an interfaith family is, “An opportunity for you and your children to learn and understand not just one, but two cultures and religions on a very deep and intimate level. Learn and embrace as much as you can.”

The scenery doesn’t look quite the same as when Larry and I shared our Sicilian pie. Interfaith marriage is a journey and we are a work-in-progress.

In the end, we need to map the course which best suits our own family. Honoring each other along the way will make the ride more enjoyable and make all the difference.

Jennifer Reinharz writes for children; blogs for grown ups; is a teacher, CrossFitter and Mom.  She is a 2015 BlogHer Voice of the Year and creator of the personal essay blog, Red said what?  Her work has also appeared in Brain, Child, Mamalode and Club Mid.  Visit her on Twitter and Facebook.