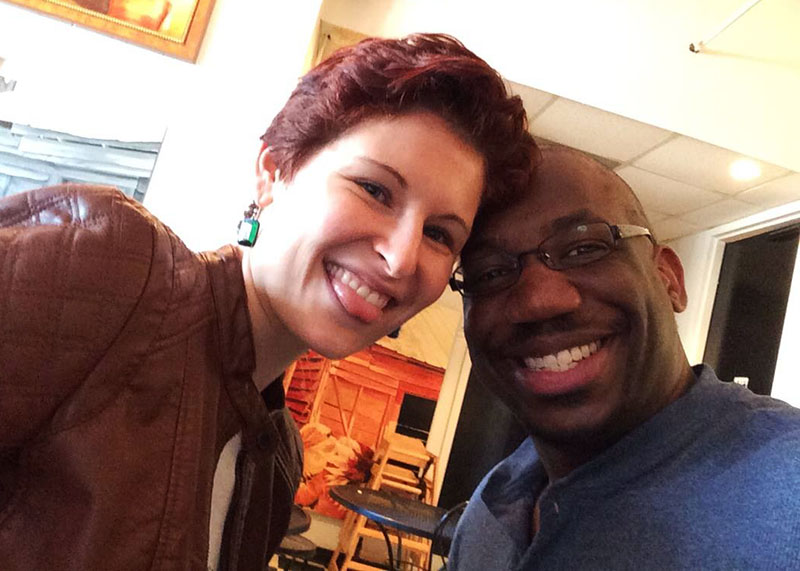 OK, I’ll come clean: I wasn’t expecting to meet my wife on Tinder.

I’m not some app-phobic, anti-technology fuddy duddy who assumed that real relationships could only happen through friendly set-ups and Katherine Heigl-worthy meet-cutes. I knew fully well that swiping right could possibly lead to a relationship. Given the app’s reputation, though, I expected that any such relationship would prove to be…well, temporary.

But something special happened on my first date with my bride-to-be. After a wonderful night filled with laughter, singing and scintillating conversation, Rebecca Lenore Herring farted in my car.

In her defense, I wasn’t actually in the car when she did it. It happened after I opened the passenger door to let her in (you know, like a gentleman who doesn’t talk about a lady’s farts), during my walk to the driver’s side. In case you’re wondering, the five seconds it takes to make that journey is, in fact, not enough time to allow a fart to dissipate.

I’m not about to pretend that I fell in love with my fiancée because of a fart. Becky is not Katherine Heigl, and even if she was, I don’t think this would qualify as a very strong rom-com inciting incident. Now that I’m far enough away from it, I can look back at that night and laugh, but that night? It wasn’t charming trying to inconspicuously hold my breath and hide the tears in my eyes as I rolled my window down, finally sucking down giant gulps of fresh air.

The moment wasn’t charming, but it was representative. Because that night, like every day of her life before it and every one since it, Becky was astoundingly, undeniably, unapologetically Becky. I’ve told her this many times, and it still holds true that Becky is the absolute Beckiest person I’ve ever met. And there’s no escaping it—to meet Becky is to be assaulted with her Beckiness. I know for certain that I could live a dozen lifetimes and never meet anyone Beckier.

I grew up a member of the Church of God: a sort of cross between Pentecostalism and Nondenominational Christianity. While I’ve mostly fallen away from the religion of my upbringing, being with Becky has meant learning about how central faith is to her culture, and how central that culture is to her sense of self. Getting to know her has meant getting to know Judaism, which has been a journey in itself.

Because I am, in many ways, Becky’s opposite—more introverted and private—I didn’t call her out on the fart that night (in fact, it wasn’t until months after our first date that I revealed to Becky that yeah, I know you FARTED IN MY CAR ON OUR FIRST DATE). She’s confessed to me that if I had, she likely would have leapt from the moving car in embarrassment and we probably would never have seen each other again. I guess it’s part of why we work so well together.

In a time when it’s so easy to represent ourselves as someone other than who we really are—be it through everyday social interactions, or even a dating app—being with someone who is so overwhelmingly, genuinely herself that she couldn’t stop it if she tried is as welcome and refreshing as those lungful’s of air on that fateful night.

I’m looking forward to this new journey that we’re embarking on and taking our first steps into forever. I don’t know exactly what to expect of our future, but I know for certain that she’ll ever remain as Becky as she has always been.

Becky is the associate director of InterfaithFamily/Atlanta.
View all posts by Becky Sowemimo →