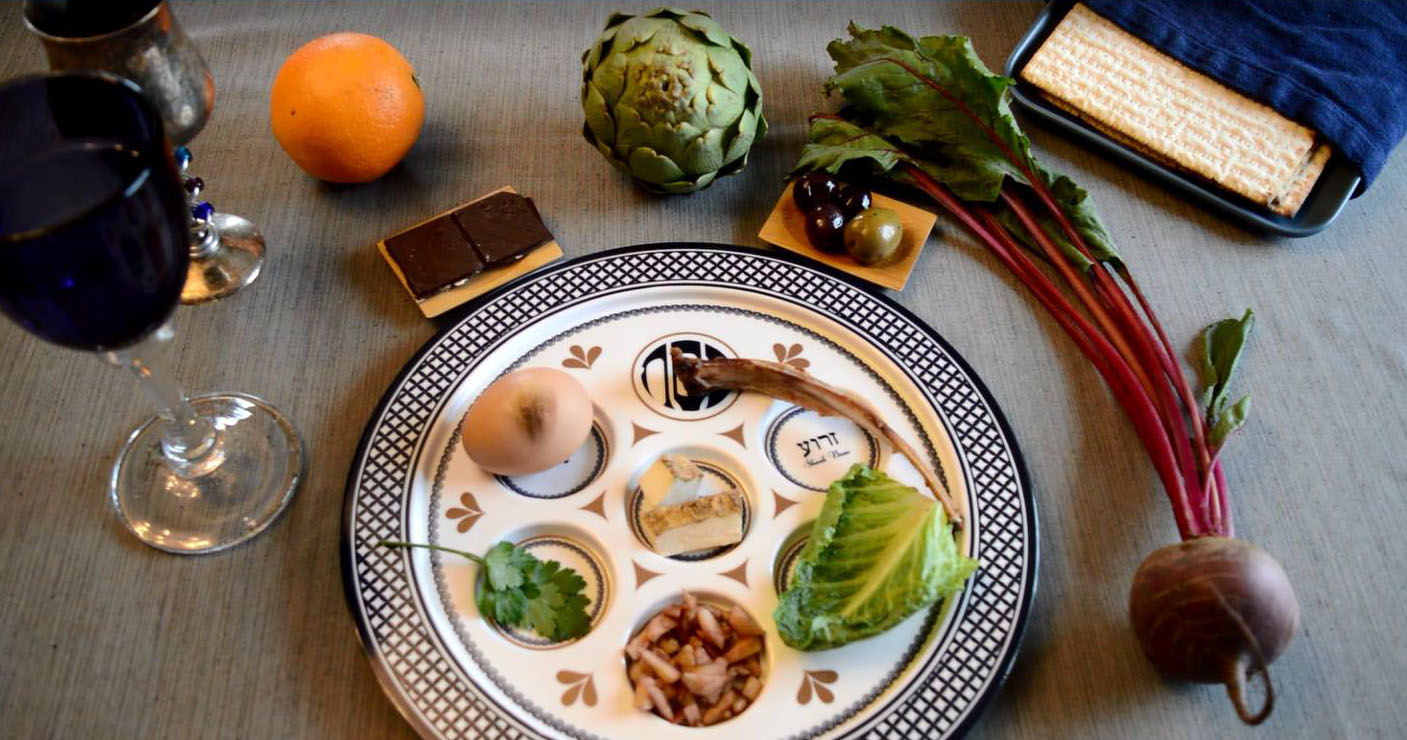 Need more information about Passover? Check out our Guide to Passover for Interfaith Families. Much of the information in the video below and on this page is from this guide. Visit our Passover page for more resources.

How to do… a seder plate

The seder plate shows the symbols talked about in the story of Passover as told in the Haggadah.
Some families have a central seder plate on the table, while others make many so that every participant can see the symbols in front of them as the story unfolds.

Maror: a bitter herb, often horseradish, or bitter greens like chicory or endive. It’s supposed to be uncomfortably hot! It represents the bitterness of slavery.

Chazeret: a bitter vegetable or green, often Romaine lettuce. It’s also a symbol of the bitterness of slavery, but it gets used in a different part of the seder than the Maror.

Bay-tzah: a roasted egg. Also represents the rebirth of spring and the national birth, or rebirth, of the Jewish people from out of the constraints of bondage. The roasting recalls the Passover sacrifice brought to the Temple in Jerusalem in ancient times.

Z’roah: a shank bone of a lamb. Represents the Passover offering of a lamb made at the ancient Temple in Jerusalem in the early spring. Sometimes a chicken neck is substituted, and in vegetarian homes, a beet or a carrot may be substituted. Charoset: is a sweet, thick or chunky fruit and nut spread that symbolizes the mortar that Jewish slaves used in their hard labors building cities and brick buildings for the Pharaohs. Jews of European descent usually make it with apples, nuts, honey, sweet wine and cinnamon. Jews from other lands have other ingredients, but it is always ground or chopped to resemble mortar and is usually brown in overall color.

In some more liberal Jewish households, people add other symbolic foods to their seder plates to call attention to issues of oppression, liberation, justice, and inclusivity. Some of these items can include:

Orange: A newer addition to seder plates, originated by Suzannah Heschel, the orange represents our need to be inclusive of all who feel marginalized within the Jewish community. It was conceived as an affirmation of our welcome of gays and lesbians; however the origins of this custom quickly become mythologized, with many believing the orange represents women’s equality in Judaism.

Olives: A few years ago, olives started showing up on the seder plate as a call for peace between Israelis and Palestinians.
“Why this olive?” “Because for millennia the olive branch has been the symbol of peace, and we seek to make peace where there has been war.

Artichoke: How about an artichoke? Rabbi Geela Rayzel Raphael suggests this prickly vegetable with the soft heart for the interfaith-friendly seder plate. “Like the artichoke, which has thistles protecting its heart, the Jewish people have been thorny about this question of interfaith marriage.”

Fair Trade Chocolate: Fair Trade certified chocolate is grown under standards that prohibit the use of forced labor. It can be placed on the seder plate to remind us that forced labor is still with us today.

Other symbolic foods have been added to the seder plate over the years – Passover is a very flexible holiday, and different families and communities adapt it to their concerns and passions. If you’d like to read about other examples of this kind of ritual innovation, click here, here, or here.

Other items that appear on the Passover table:
Three matzot: Matzah (singular, the plural is matzot) is the cracker-like bread eaten by Jews during Passover. There are two explanations for this: matzah is the food of poor slaves or there was no time for our bread to rise in our hurried escape from Egypt. Three matzot are covered with a cloth and placed under or next to the seder plate. You will also need enough matzah for your guests to eat during the seder.

Salt water: We dip the greens in salt water. This represents the tears of the Israelites, whose sons were taken from them by the Pharaoh. You may need multiple bowls so all guests can easily dip. You may choose to add other dips for the greens as well.

Wine: We are commanded to drink four cups of wine (or grape juice) during the seder, so each guest needs their own wine cup. Why four? God made four promises to the children of Israel: I will take them out, I will rescue them, I will redeem them and I will make them my people. Some people also connect each cup to one of the matriarchs: Sarah, Rebecca, Rachel and Leah.

Cup of Elijah: A large cup filled with wine is placed in the center of the table for Elijah. Why? Because Elijah will accompany the Messiah, he symbolizes our hope for redemption. We open the door and invite Elijah, the prophet of hope and happy endings, as part of the seder ritual.

Cup of Miriam: A modern custom is to fill a cup with water and place it next to the cup of Elijah. Miriam, the prophet, has many connections to water. She watched over her baby brother Moses as he floated in a reed basket in the Nile and led the women in song after the miracle of the splitting of the sea. A well is said to have followed the Israelites as they traveled through the desert because of Miriam’s faith.